The CEAS Film Library collection is open for browsing and borrowing by appointment.

If you already know the films you would like to borrow, first use our online catalog to check on the film's availability, then email the film title(s) to Myra Su msu@uchicago.edu at least 2 business days in advance to schedule an appointment to pick up your films. The Film Library is located at 1155 E. 60th Street, Room 309, Chicago, IL 60637.

The CEAS Film Library is one of the largest East Asian DVD collections in the United States, comprising over 7,000 titles from China, Japan, and Korea. It includes historical films, documentaries, television series, and contemporary cinema. Many of the films are imported from overseas and are difficult to find in the U.S. Films are available for check-out free of charge to any current University of Chicago student, staff, or faculty member. CEAS Associate Members, K-16 educators, and the general public may also borrow films for educational use.

Search the online film catalog to find what you're looking for. Use the "Advanced Search" function to narrow down films by language, director, subtitles, etc. Write down the CEAS catalog number so you can find it on the shelf when you arrive. If a film is currently checked out, the catalog listing will read "Not Available."

We encourage faculty and students to submit requests for new films that would be a good addition to our collection. For any film related questions, please contact Myra Su at msu@uchicago.edu.

CEAS does not guarantee that films borrowed from the Film Library will be viewable on your player. Because many of the DVDs in the CEAS film library originate overseas, viewers may encounter regional code differences that affect playback. Region 1 DVD players from the United States will often not play Region 2 and 3 DVDs from overseas. Many desktop computers and laptops only allow a region change five times before locking. The free, legal video player VLC is a downloadable alternative that bypasses region issues. More information about DVD region codes.

We don't have a film?  Please submit a request to propose a new film for the collection. 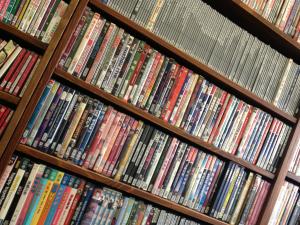