“Road of Light and Hope” Exhibition: Commemorating the 120-year History of Consulate-General of Japan in Chicago

Commemorating the 120-year history of the Consulate General of Japan in Chicago in December 2017, the Consulate-General of Japan in Chicago will host a photo exhibition of Japanese National Treasures, photographed by Miro Ito, from November 1st to 28th. Co-organized by the Japan Camera Industry Institute and Media Art League, this event will take place at JIC HALL, CONSULATE-GENERAL OF JAPAN IN CHICAGO at 737 N. MICHIGAN AVE. SUITE 1000.

The exhibited photos portray the most prominent National Treasures of the Todai-ji Temple, famous for its Great Vairocana Buddha* completed in 752 AD by Shomu Tenno (701-756), which many Japanese identify with as a symbol of resilience. After having been severely damaged twice during wars, the statue was each time again reconstructed through a concerted effort by the populace of Japan. Today it constitutes part of the UNESCO World Heritage Site: Historic Monuments of Ancient Nara**.

41 artistic photo images printed on washi paper will be presented in hanging scroll (kakejiku) format. These are extremely rare images, since many of the portrayed artifacts have never been photographed during the last 40 years or so.

With the special courtesy of Todai-ji Temple, many never-seen-before images of Tenpyo Era sculpture from Nara, Japan, can be seen at the venue.

For a poster with relevant information pertaining to this event, including dates and time, please click here. 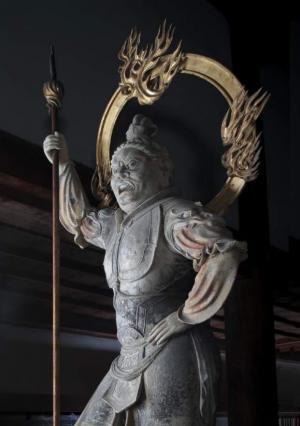