Constructed around a three-quarter civilization treating aspects of East Asian culture, history, politics and society, the Young Du Chung Chin East Asian Civilizations Program in Beijing this autumn quarter featured a weeklong excursion to Japan.  While China, in keeping with the location of the program, holds a central position in the sequence, some professors may choose to focus on other Asian countries such as Korea or Japan.  Taught in English by Chicago professors, the 2017 autumn quarter’s focus was “Cultures of Urban Modernity in Tokyo,” taught by Professor Michael Bourdaghs (Robert S. Ingersoll Professor in East Asian Languages and Civilizations and the College).  The class explored different ways in which the modern cultures of Tokyo have been represented in a variety of artistic media, including literature, film, painting, photography, manga, popular music, and museums. The class focused on four key turning points in the history of the city, each representing a moment of traumatic destruction and rebirth: 1923, 1945, 1964, and 2020.  Students learned about the history of one of the world’s great cities, and explored how a variety of artists working in different media have creatively engaged with its shifting cityscapes and urban lifestyles.

I came here to expand my understanding of the world outside my country, and I believe this program helped me achieve that tremendously. I believe that the classes were very helpful in helping us understand the Chinese and Japanese cultures and the trends/events in the past.” - Yigit Akedemir (4th Yr. in Economics/Statistics)

As part of this quarter’s program, students had the opportunity to travel to Japan and visited Tokyo and Kyoto.  Upon visiting Tokyo Tower, students met with three organizers of the “Tokyo Heterotopia" public art project, which started as a site-specific drama performance, morphed into a video art installation, and is now an app for smartphones. It takes specific landmarks, many of them quite obscure, within the city that link Tokyo to other places in Asia and builds short stories around them revolving around contemporary immigrants to Tokyo.  Professor Bourdaghs translated six of the pieces from the project, and in the company of the organizers, students visited those six locations, including the grave of pioneering Taiwanese linguist Ong Iok-tek, the site near Tokyo's industrial harbor in Shinagawa that was formerly home to the International Refugee Assistance Center set up to receive "boat people" refugees from Vietnam.   Hosts to the group were Tanaka Saki and Hayashi Tatsuki (both of Port B Theatre Company, the sponsor of Tokyo Heterotopia), and Prof. Keijiro Suga, one of the novelists who wrote stories for the project.

Both Professor Fox and Professor Bourdaghs were extremely passionate in their respective fields. Their passion to teach really rubbed off on us, and it made us more interested in our studies too. - Henry Lee (3rd Yr. in Computational and Applied Math/Economics)

Students also visited Tokyo Station, the Imperial Palace, and the controversial Yasukuni Shrine and Yushukan War Memorial Museum. Professor Akiko Takenaka (University of Kentucky), author of a book on Yasukuni, served as a guide during these site visits.  Students also walked through the Harajuku and Shibuya neighborhoods with photographer Mike Nogami, famous for his portraits of Japanese rock musicians and youth culture from the 1960s on.  Photographs he'd taken of the neighborhoods in the 1960s, 70s, and 90s were featured and compared to the current state of the area. Professor Yoichi Sato of Waseda University also joined the group for this visit and shared his knowledge of the neighborhood's history as a center for the U.S. military presence in Japan during the 1940s and 50s.  The site visits ended with a trip to Kyoto where students visited the Temple of the Golden Pavilion and the Imperial Palace.

I was able to form a relationship with my professors outside the classroom for the first time in my college career. - Claire McHugh (3rd Yr. in Political Science)

In addition to traveling to Japan for site visits, students had the opportunity to visit sites in Beijing including the Museum of the War of Chinese People’s Resistance Against Japanese Aggression and the 2008 Beijing Summer Olympic sites.  The class’s final week featured students producing a final creative project in the class representing their own interpretation of a specific Tokyo landmark.

For more information regarding this program, please click here. 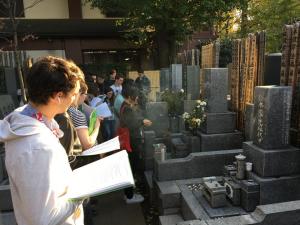 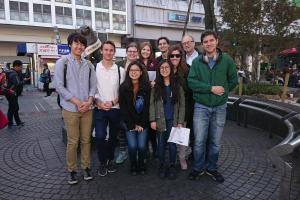 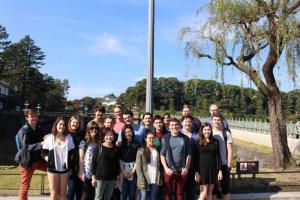 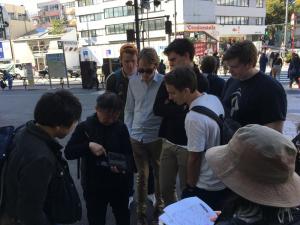