The Committee on Japanese Studies at the Center for East Asian Studies at the University of Chicago is proud to announce the 2018-19 William F. Sibley Memorial Subvention Award for Japanese Translation to Cornell University Press for Eight Dogs Part One: An Ill-Considered Jest by Kyokutei Bakin, translated by Glynn Walley (University of Oregon).

Eight Dogs Part One: An Ill-Considered Jest is a translation of the first fourteen chapters of Kyokutei Bakin’s Nanso Satomi hakkenden (Eight Dogs of the Satomi Clan of Southern Kazusa), a multigenerational story of the rise of the Satomi clan and the adventures of the eight Dog Warriors. The progenitor of the modern Japanese historical adventure novel, Hakkenden has been adapted for film, television, popular novels, comic books, and even opera. This first volume explains how the Dog Warriors came to be by telling the story of the marriage of Princess Fuse, the daughter of the Satomi lord, to Yatsufusa, the family dog. Glynne Walley’s translation also includes the illustrations and advertisements from the original woodblock editions.

The William F. Sibley Memorial Subvention Award for Japanese Translation is an annual competition coordinated by the Committee on Japanese Studies at the Center for East Asian Studies at the University of Chicago. Sibley was Associate Professor Emeritus in East Asian Languages & Civilizations and a renown scholar and translator of Japanese literature. He is best known for his work, The Shiga Hero, first published in 1979 by the University of Chicago Press, which introduced Western readers to the fiction of Shiga Naoya, one of Japan’s foremost modern writer. In keeping with Sibley’s lifelong devotion to translation and to the place of literature in the classroom, up to $3000 is awarded each year as a publishing subvention for translations of Japanese literature into English. 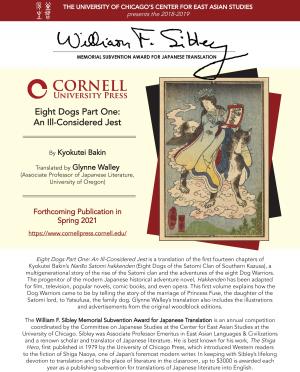