The Committee on Japanese Studies at the Center for East Asian Studies at the University of Chicago is proud to announce the 2019-20 William F. Sibley Memorial Subvention Award for Japanese Translation to Columbia University Press for An I-Novel by Minae Mizumura, translated by Juliet Winters Carpenter.

Minae Mizumura’s An I-Novel is a semi-autobiographical work that takes place over the course of a single day in the 1980s. Minae is a Japanese expatriate graduate student who has lived in the United States for two decades but turned her back on the English language and American culture. After a phone call from her older sister reminds her that it is the 20th anniversary of their family’s arrival in New York, she spends the day reflecting in solitude and over the phone with her sister about their life in the United States, trying to break the news that she has decided to go back to Japan and become a writer in her mother tongue. Published in 1995, this formally daring novel radically broke with Japanese literary tradition. It liberally incorporated English words and phrases, and the entire text was printed horizontally, to be read from left to right, rather than vertically and from right to left. In a luminous meditation on how a person becomes a writer, Mizumura transforms the “I-novel,” a Japanese confessional genre that toys with fictionalization. An I-Novel tells the story of two sisters while taking up urgent questions of identity, race, and language. Above all, it considers what it means to write in the era of the hegemony of English—and what it means to be a writer of Japanese in particular. Juliet Winters Carpenter masterfully renders a novel that once appeared untranslatable into English.

The William F. Sibley Memorial Subvention Award for Japanese Translation is an annual competition coordinated by the Committee on Japanese Studies at the Center for East Asian Studies at the University of Chicago. Sibley was Associate Professor Emeritus in East Asian Languages & Civilizations and a renown scholar and translator of Japanese literature. He is best known for his work, The Shiga Hero, first published in 1979 by the University of Chicago Press, which introduced Western readers to the fiction of Shiga Naoya, one of Japan’s foremost modern writer. In keeping with Sibley’s lifelong devotion to translation and to the place of literature in the classroom, up to $3000 is awarded each year as a publishing subvention for translations of Japanese literature into English. 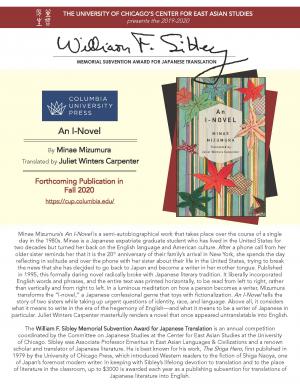