On Saturday, October 28th, the fourth installment of the Atomic Age Series will take place at the University of Chicago campus featuring a panel of scholars, including the director of Fukushima: A Record of Living Things.

This day-long symposium will open with remarks from Director Masanori Iwasaki and showcase episodes from his documentary, Fukushima: A Record of Living Things - "Disruption" (Episode 2) and "Follow-Up" (Episode 5).  Discussions will take place between Director Iwasaki and Shin-ichi Hayama (Professor at Nippon Veterinary and Life Science University), Robert (Bo) Jacobs (Professor at the Hiroshima Peace Institute and Hiroshima City), and Martha McClintock (the David Lee Schillinger Distinguished Service Professor Emerita in Psychology and Founding Director of the Institute for Mind and Biology at the University of Chicago).  Also being featured during the program will be testimonies featuring Mary Olson (Senior Radioactive Waste Policy Specialist with Nuclear Information and Resource Service and Founder of the Gender and Radiation Impact Project) and Trisha Pritikin (Advocate for Hanford's Downwinders and President of Consequences of Radiation Exposure Museum and Archives).

The program will focus on the human and social impact of the atomic age and most particularly the Fukushima nuclear disaster, focusing on the wildlife of the Fukushima region and the biological sciences.  The screening of Masanori Iwasaki’s Fukushima: A Record of Living Things picks up on a theme explored in evolutionary biologist Timothy Mousseau’s presentation at Atomic Age III, on the state of “non-human biota” following Fukushima.  Iwasaki, with a long and distinguished career in making environmental and wildlife documentaries, completed his first work on post-Fukushima plant and animal life in 2013 and proceeded to release a film each subsequent year, numbering five to date. The annual documenting of changes in the plant and animal world provides a distinctively fresh, quietly arresting angle on the nuclear disaster.

The investigators in these films are both interested citizens and specialists. Shin-ichi Hayama, Professor at Nippon Veterinary and Life Science University, is one specialist who appears in several episodes. His long-term study of the Japanese monkey (“snow monkey,” “Japanese macaque”), especially in relation to proximate habitat with humans, prepared him, surely unexpectedly, to study the impact of radiation exposure on the species.  In titling his film series, Director Iwasaki was inspired by Akira Kurosawa’s 1955 “A Record of Living Things” (known in English as Record of a Living Being or I Live in Fear), in which a startlingly young Toshiro Mifune plays the role of an autocratic patriarch so terrified by Pacific nuclear testing coming only ten years after Hiroshima and Nagasaki that he attempts to transport his exasperated family to Brazil. What is madness, what is sanity in the nuclear age, the film seems to ask, over a distance of sixty-five years, as Japanese society hurtles toward the 2020 Tokyo Olympics.

This event will take place at the University of Chicago's Social Sciences Research Building (1126 E. 59th St.) in Room 122 and is FREE and open to the public.

This event is sponsored by the Committee on Japanese Studies at the Center for East Asan Studies (CEAS) with support from a Title VI National Resource Center Grant from the United States Department of Education.  It is organized by Norma Field (University of Chicago, retired) and Yuki Miyamoto (DePaul University) with the help of Satoko Bourdaghs (Columbia College, Chicago), Yoko Katagiri (University of Chicago), and Rieko Tomomatsu (former vice principal, Hosei University Junior and Senior High School and now community member). 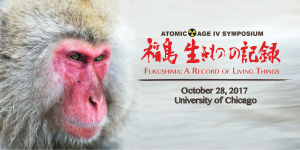