On February 26th 2018, the Center for East Asian Studies’ third event in the series “East Asia by the Book! CEAS Author Talks” was held at the Seminary Co-op Bookstore.  This event featured Yoon Sun Yang, Assistant Professor of Korean and Comparative Literature at Boston University, talking about her new book: From Domestic Women to Sensitive Young Men: Translating the Individual in Early Colonial Korea.

The event opened with a brief introduction to Professor Yang and her work by Kyeong-Hee Choi, Associate Professor in Modern Korean Literature at the University of Chicago. Yang began by talking about what initially motivated her to study a group of novels in wide circulation in Korea between 1906 and 1915 that she calls “early colonial domestic novels.” She had been fascinated with these stories since her first encounter with them during her junior year of college, both because they looked quite different from both premodern tales and contemporary Korean literature and because they kept challenging the limits of her imagination. When she finally decided to write about them for her doctoral dissertation, however, she realized that within the existing theoretical paradigm these novels were characterized as inferior forms of modern prose fiction. After doing more research, she identified behind this paradigm the assumption that a serious, modern Korean literary work should resemble examples from the nineteenth-century European literary canon and, instead of domestic women, revolve around deep-thinking male intellectuals.

Yang then walked the audience through the processes through which she came up with an alternative theoretical frame in order to do justice to early colonial domestic novels and their female characters. This frame draws on Lydia Liu’s concept of translingual practice in which translation is not about seeking the equivalent of, for example, a European term in a specific non-European lexicon, but rather is the process of the cross-cultural negotiation between “host” and “guest” languages. Yang contended that some of the female figures of the early colonial domestic novel “translated” one of the European notions introduced to Korea in the closing years of the nineteenth century, the individual. By doing so, she proposed to revise the canonical understanding that the first Korean literary “individual” was the protagonist of Yi Kwangsu’s novel Mujong (The Heartless, 1917), an educated young man looking inward to find who he is, whom Yang calls a “sensitive young man” in her book.

Yang suggested that in order to move away from a Eurocentric and male-elite-centered literary history, one should revise the question of “how closely did Korean fictional characters imitate the supposed universal archetype of the individual” to “what constituted the individual in Korea.” According to her, the female protagonists of the early colonial Korean domestic novel peculiarly imagine the individual as inseparable from the domestic and the public. To support her view, she pointed to a scene from Yi Injik’s novel, Tears of Blood, in which a U.S.-educated young Korean woman avows her life-long devotion to Korean women’s education, working to help them gain equal rights with men, and the future of the nation, thus claiming her new “public” identity. Yet she does so while exercising her “individual” free will in agreeing to marriage with a reform-minded man, thereby embracing her new “domestic” identity as his wife.

The emergence of the figures of sensitive young men in mid-1910s signaled a shift in the literary translation of individuality in Korea. Their individuality, unlike that of the female figures in early colonial domestic novels, took the form of interiority. Yang emphasized that these male characters, no less cultural hybrids than the figures of domestic women, imagine their interiority and personal growth as indivisible from the nation’s progress.

During the Q&A session, the audience actively engaged with Professor Yang on varying topics, such as what inspired her to investigate  “individuality,” how the understanding of “individuality” shifted throughout the twentieth century in Korea, and what might be on the opposite side of “individuality” in society.  Finally, the event finished with a short reception, allowing the guests to have further discussions with Yang.

The Center for East Asian Studies' East Asia by the Book! CEAS Author Talks series showcases CEAS faculty, alumni, and special guests who provide author talks and book launches at the Seminary Co-op Bookstore as a way to engage the broader community in conversations regarding key scholarship on East Asia.

The next East Asia by the Book! CEAS Author Talks event will take place January 25, 2019 and feature "Revolutionary Waves: The Crowd in Modern China" by Tie Xiao (PhD, 2011), Associate Professor in the Department of East Asian Languages and Cultures at Indiana University with Robert Bird (Associate Professor, Department of Slavic Languages & Literatures) as Discussant.

Special thanks to Professor Yoon Sun Yang for contributing to this article. 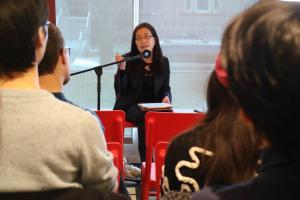 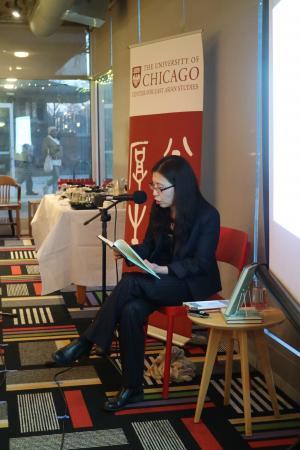