On the evening of Friday, January 25, PhD graduate from the University of Chicago’s Department of East Asian Languages and Civilizations in 2011, Tie Xiao, gave a talk on his book Revolutionary Waves: The Crowd in Modern China. The Center for East Asian Studies was honored to host this first Author Talk on the Winter quarter with Xiao, currently an Associate Professor in the Department of East Asian Languages and Cultures at Indiana University. The event was hosted at the Seminary Co-op bookstore.

The event began with remarks from Robert Bird, Professor in the departments of Slavic Languages and Literatures and Cinema and Media Studies at The University of Chicago. Bird began with a brief description of the book as an examination of the crowd in modern China, and how the crowd became the focus of such intense theorization. He also described how Xiao based his book on a great variety of sources, including poetry, sociological studies, and new aesthetic modes of representation.

At Bird’s invitation, Xiao stepped in to give a more detailed review of the topics in his book through an explanation of a popular game, “Obey the Crowd,” which worked roughly like “Simon Says”: players give each other instructions, but are only supposed to obey if the instruction is prefaced by the words: “the crowd says…” The pedagogical purpose of the game was to indicate the crowd is no longer a surface to be acted on, but a source of authority and legitimization. The game illustrates a great paradox of the Chinese crowd discourse, the ramifications of which have not been previously examined, where the desires of the crowd are seen to be realized through the mediation of intellectuals, who serve as a screen through which the desires can be heard.

After Xiao’s brief, though thorough introduction, he and Bird discussed questions such as If and how it is possible to separate the crowd from the theorists and intellectuals speaking for it, and whether or not the crowd is a successful progressive or revolutionary tool. Answers to these questions are not straightforward, but Xiao gave thoughtful and illuminating responses through the works of authors mentioned in his book. Bringing the book into a contemporary context, Xiao mentioned that “original scene” (such as crowds in the past compared to crowds in the current political age) helps us to understand both the promise and the perils of our current state.

The discussion was followed by a brief Q&A session in which Xiao’s career as a fiction writer in Chinese was mentioned along with the importance of differentiating between the term “crowd” (which Xiao uses in his book) compared to “masses.” A reception followed the talk in which audience members could speak more directly with Bird and Xiao.

The next East Asia by the Book! CEAS Author Talks will take place Tuesday,  April 16th at 5 pm at the Seminary Co-op Bookstore and feature Associate Professor of Asian Languages & Literature at the University of Washington, Justin Jesty. 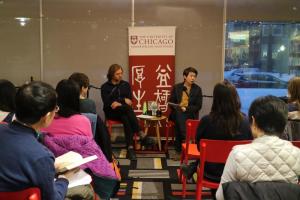 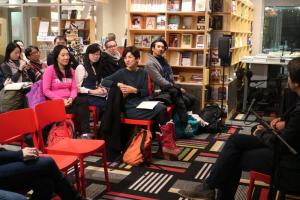 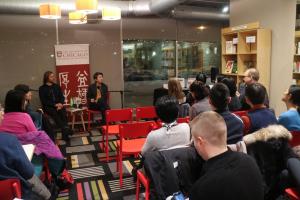