East Asian Languages and Civilizations Ph.D. student, Emily Jungmin Yoon, debuts a collection of poems exploring gender, race, and violence in her new publication with HarperCollins Publishers, "A Cruelty Special to Our Species."

Emily confronts the histories of sexual violence against women, focusing in particular on Korean so-called "comfort women," women who are forced into sexual labor in Japanese-occupied territories during World War II.

In wrenching language, "A Cruelty Special to Our Species" unforgettably describes the brutalities of war and the fear and sorrow of those whose lives and bodies were swept up by a colonizing power, bringing powerful voice to an oppressed group of people whose histories have often been erased and overlooked.

Moving readers through time, space, and different cultures, and bringing vivid life to the testimonies and confessions of the victims, Emily Yoon takes possession of a painful and shameful history even while unearthing moments of rare beauty in acts of resistance and resilience, and in the instinct to survive and bear witness.

Emily is interested in festishization and the objectification of kisaeng and other women in colonial Korea.  She focuses on the study of gendered representations in literature and visual media.  Her poetry explores the themes of trauma, war, and violence toward women.

For more information on this publication, please click here. 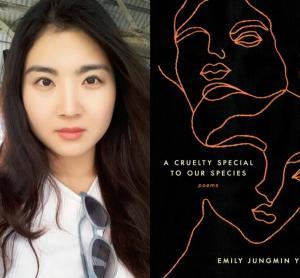