In August 2019, the Aichi Triennale in Nagoya, Japan attracted international attention when, in response to political pressure including threats of violence, its organizers decided to close one of the exhibits after just three days. This exhibit, presciently titled “After ‘Freedom of Expression’?” (表現の不自由展：その後), included a depiction referencing the long unacknowledged hardships endured by wartime ‘comfort women’ and featured a number of works that had previously been subjected to censorship in Japan. This event will feature a presentation by Yoshiko Shimada, a leading feminist performance and video artist and one of the participants in the “After ‘Freedom of Expression’?” exhibit, as well as presentations and a roundtable discussion involving scholars who will situate the Aichi Triennale incident in a number of relevant contexts involving censorship, contemporary art, historical memory, and debates over freedom of expression in Japan, East Asia, and the United States. 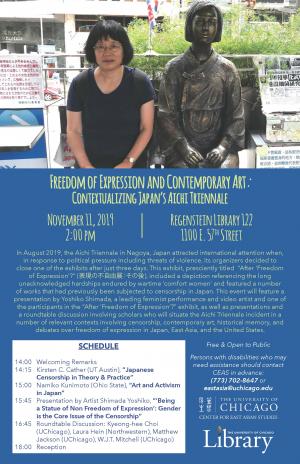