A screening of two films with panel discussion

Free and open to the public. Please register here by Wednesday, March 9.

The Great East Japan Earthquake struck 5 years ago, on March 11, at 14:46:23 local time.  The earthquake, tsunami, and nuclear disaster unleashed death and devastation on the region. Five years later, despite the drumbeat proclaiming the ties that bind the nation, ensuring reconstruction and rebirth, the injuries remain deep. In the case of the nuclear disaster, whose impact is global, nothing has been resolved. The government has set spring of 2017 as an end date with measures to encourage and pressure evacuees, voluntary and not, to return. The goal is to effect normalcy well before the 2020 Tokyo Olympics.

We will observe the fifth anniversary by screening two films, followed by a panel discussion and audience Q&A. Nuclear Japan (2014), a critical scrutiny of nuclear power plants in Japan is a first film by antinuclear attorney Kawai Hiroyuki. Little Voices from Fukushima (2015) segues between mothers searching for ways to protect their children in Japan and Belarusian mothers and children a quarter-century after the Chernobyl disaster.  It is by Kamanaka Hitomi, veteran documentarian of the impact of the nuclear age on human beings.

Trailer for Little Voices of Fukushima:

Judy HOFFMAN – Documentary filmmaker, member of Kartemquin films, and Professor of Practice in the Arts, Department of Cinema and Media Studies, University of Chicago 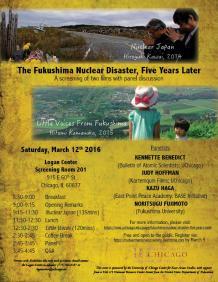