The William F. Sibley Memorial Subvention Award for Japanese Translation is an annual competition coordinated by the Committee on Japanese Studies at the Center for East Asian Studies at the University of Chicago.  Sibley was Associate Professor Emeritus in East Asian Languages & Civilizations and a renown scholar and translator of Japanese literature.  He is best known for his work, The Shiga Hero, first published in 1979 by the University of Chicago Press, which introduced Western readers to the fiction of Shiga Naoya, one of Japan's foremost modern writer.  In keeping with Sibley's lifelong devotion to translation and to the place of literature in the classroom, up to $3,000 is awarded each year as a publishing subvention for translations of Japanese literature into English.

The inaugural 2016-17 award was made to Columbia University Press for Sacred Cesium Group and Isa's Deluge: Two Novellas of Japan's 3/11 Disaster by Kimura Yusuke and translated by University of Kentucky's Doug Slaymaker.

In these two novellas, Kimura explores human and animal life in northern Japan after the natural and nuclear disaster of March 11, 2011.  Kimura inscribes the "Triple Disaster" into a rich regional tradition of storytelling, incorporating far-flung voices and experiences to testify to life and the desire to represent it in the aftermath of calamity.  This forthcoming publication will be released January 2019.

For more information on this publication, please click here. 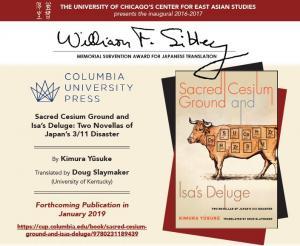