CEAS was honored to welcome Professor Levi McLaughlin (Associate Professor in Philosophy and Religious studies, North Carolina State University) for the latest in the “East Asia by the Book!” CEAS Author Talks series! Having taken place on March 3rd at the Seminary Co-op, Professor McLaughlin was joined by discussant Andrew Kunz (UChicago PhD candidate in Anthropology and Sociology of Religion) and they discussed McLaughlin’s latest book “Soka Gakkai’s Human Revolution: The Rise of a Mimetic Nation.”

He spent two decades learning about and researching Japan’s largest and most influential religious organization, Soka Gakkai, and began the talk with what the religion is and why he felt it necessary to study. He explained how it should be understood through the “twin legacies” of Nichiren Buddhism and Modern Humanism, and that it is perhaps Japan’s most successful religious export. There has been no recent analytical book on this religion (most prior sources being commissioned by either the religion itself, or an opposing religion), so he felt it an important subject to take on. He took a bottom-up perspective in his research in order to understand how ordinary people of the religion live their lives, and he made a point to stress that the people he spoke with during his research were his friends, not, more coldly, “informants.”

He makes the claim in his book that Soka Gakkai is a mimetic-nation state, and during the talk he looked at reasons such as the doctrinal training modeled after standardized testing (he partook in the testing himself), it’s political engagement through Komeito (a political party in Japan), and Soka Gakkai’s massive bureaucracy resembling civil service as examples supporting his claim.

McLaughlin then read a portion of his afterward which was followed by a Q&A with the discussant and then the audience. In particular, this touched on the element of music in Soka Gakkai, and the affiliated orchestra that McLaughlin participated in as part of his research. Excitingly, he mentioned a potential second book to come focusing specifically on the musical components of Soka Gakkai, which sadly had to be mostly eliminated from the current one. The event was followed by a reception, during which the audience had the chance to ask McLaughlin questions more directly. 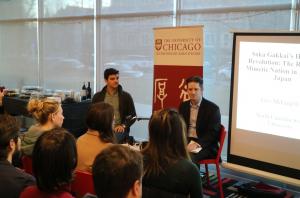 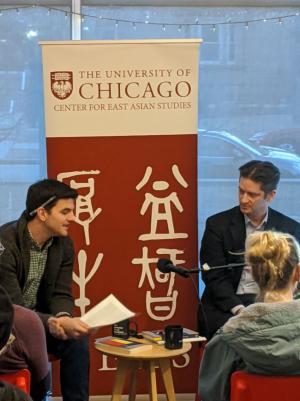