On Friday, February 17th, International House’s Assembly Hall was filled with students, faculty, and other guests for a lecture and performance from renowned biwa performer - Yoko Hiraoka. She was introduced by Collegiate Assistant Professor, Ashton Lazarus, who specializes in medieval Japanese literature and performance.

Yoko Hiraoka is a senior master performer and licensed teacher of biwa, koto, shamisen and jiuta voice. She is a native of Kyoto, Japan and studied Chikuzen biwa in the Kōmyōji-ryu based in Osaka, under the Iemoto Suga Kōka who is a direct disciple of the Living National Treasure, Yamazaki Kyokusui, the Iemoto of the Yamato-ryu biwa-gaku. Ms. Hiraoka also studied classical koto and shamisen music from an early age.  Her performance career originated in Japan and spans almost 30 years. She has been a member of the Kyoto Hogaku Group and the Kyoto Sankyoku-kai in Japan. Her repertoire includes contemporary compositions and improvisations as well as the classical repertoire.

Biwa is a traditional Japanese musical instrument that dates back to the 7th Century in Japan. It uses a pentatonic scale—each octave contains five notes—rather than a diatonic scale more commonly found in western music.  One of the most important features of the biwa’s characteristic tone is the relation of the frets to the strings. Unlike a Western guitar, how hard one presses the strings onto the frets will determine the pitch of the sound.  Chikuzen biwa is one of the biwa music traditions stemming from its long history. It is unique from other traditions because it created a new narrative style to appeal to a contemporary urban audience. It is held sideways rather than upright like for other biwa instruments. The plectrum, used to press on the strings, is larger for the Chikuzen biwa than other kinds.  The popularity of biwa music reached its height during the Meiji Restoration because the music became accessible to everyone, as a result, new schools formed at the turn of the twentieth century.  Starting in the late 1960s, there has been a revival of biwa music. It has taken on new forms where pieces like Takemitsu Toru’s “November Steps” have incorporated biwa music with Western orchestral performance.*

Ms. Hiraoka discussed the origins and evolution of this music form. Before each piece that she performed, she explained its importance. Her selection of pieces came from the medieval Japanese legend Tale of the Heike. There was a Q&A session following the performance with a reception to end the program. 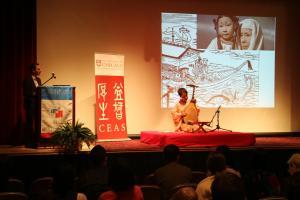