On October 10, the Center for East Asian Studies hosted the noted Japanese novelist Yu Miri, who came to read from and discuss her 2014 novel Tokyo Ueno Station, recently translated by Morgan Giles to much acclaim and winner of the 2020 National Book Award in Translated Literature. The author was joined by hosting faculty member Michael Bourdaghs (Robert S. Ingersoll Professor in East Asian Languages and Civilizations and the College) and Chicago-based actor and University alumnus Dwight Sora, who presented the English rendition of the book alongside Yu’s Japanese reading.

Following an introduction by Bourdaghs, the event began with a reading from the beginning of the novel, with Yu reading in the original Japanese and Sora presenting the English version. Through the chosen passage, the audience was introduced to a mysterious, unknown narrator who alternately describes the scenes surrounding the Ueno train station in Tokyo and discusses his own mysterious past. Alongside such enigmatic statements as “I had no luck,” the narrator focuses specifically on the appearances of the homeless people living in Ueno Imperial Gift Park, eventually counting himself among them. He recounts such details as where the denizens of Ueno Park would acquire their food— “There was an unspoken agreement with the many long-established restaurants in Ueno: after they closed for the night, many places did not lock their back doors”---or the fact that when the imperial family visited the park, all of its residents would be evicted.

According to Yu during the discussion following the reading, this detail inspired her to begin writing the book. Upon hearing about this process of eviction, she decided it would be “better if those people could be heard” and began meeting people who lived in the park in an attempt to tell their stories. The result was Tokyo Ueno Station, whose narrator turns out to be a ghost and former resident of Ueno Park, who serves as the mouthpiece of the homeless that Yu talked to, through the story of his unfortunate life encompassing key moments of Japanese history and tragedies like the 2011 Tohoku Tsunami.

This attempt to tell the story of Japan’s unheard echoes other initiatives Yu has undertaken, as told by Bourdaghs in his introduction: for example, following the 2011 Tsunami, Yu worked with residents and collected their stories on a radio program. She also opened a bookstore, theater space, and café in Fukushima (the most affected area) in order to help with cultural revitalization following the disaster.

Following the reading, Yu answered questions posed by Bourdaghs and the audience with Danlin Zhang as translator, a PhD student in the Department of East Asian Languages and Civilizations. Many addressed the use of sound in her writing—even those who cannot understand Japanese could enjoy her reading the sounds of a train coming into a station (a sequence not included in the English translation). This use of onomatopoeia appears in many of Yu’s works, especially her soon-to-be-translated novel The End of August, set in Japanese-occupied Korea telling the story of Yu’s grandfather. In this work, Yu transcribes, among other noises, the sound of a certain cicada in both Japanese and Korean onomatopoeia (versions that sound totally different). Yu explained that “there are certain thoughts and emotions that cannot be expressed through language”, but, using onomatopoeia she can not only include the novel but put them “as the novel” . This practice was especially pertinent in Tokyo Ueno Station, since the imitative words help to simulate the narrator’s feeling of “existence being invaded.”

Yu also discussed her writing process, saying that she does not really “think about plot when [she] write[s]” and simply lets the words take her where they will, and her philosophy about interpretations—that is, that the book, once published, belongs to the reader more than to the writer. The event concluded with Yu’s admission that her favorite sound is the sound of cicadas.

Tokyo Ueno Station can be found for sale at the Seminary Co-op Bookstores. It is the winner of the 2020 National Book Award in Translated Literature and is a New York Times Notable Book of the Year. Yu Miri will be returning to Chicago during the 2023-2024 academic year for a 6-month residency at the Neubauer Collegium, working on the project “Restaging the Lakeview Japanese American Neighborhood”, where she will work with a team of University of Chicago faculty to use oral history and film to retell the stories of Japanese-American Chicagoans following their release from internment camps. 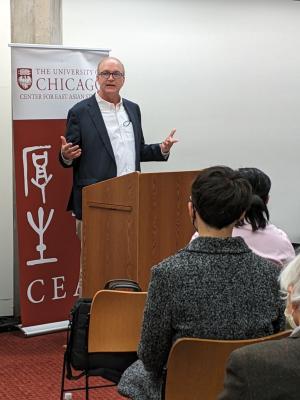 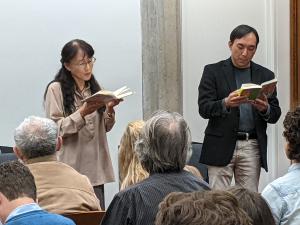 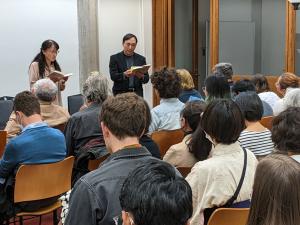 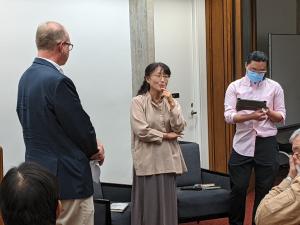