The study of East Asia is perennially haunted by the specters of standardization, and the centralization of political and cultural capital in the nation-state.  What is often lost in the margins is the particular, the non-standard, the suppressed, the minor, and the indigenous experience in which vernacular practice and its potential for various modes of reproduction, resistance, transcendence, and imminence takes place.  Rather than defining the object of this conference through the arbitrary political demarcations of nation, or the structural mechanisms of the state, or an oversimplified, homogenized discourse of particular -isms, we want to focus on place, community, and people created by and through a variety of practices.  Practice is embodied: it is always localized and informed both by geographically-defined environments and by ever-changing networks of power.  The vernacular holds the prospect of specificity, and practice, that of immediacy: in combination, they can be used to address dynamic issues of democracy, agency, and power.

This conference is thus thematically, rather than geographically, oriented, and therefore will host participants from diverse methodological and regional backgrounds, and encourage thinking that crosses national, temporal, and disciplinary boundaries to critically rethink the categories that both bind and sub-divide area studies.

5:00pm
Keynote by Bao Weihong, Associate Professor at UC Berkeley and author of Fiery Cinema: The Emergence of an Affective Medium in China, 1915-1945

What is an Environment? Set Design Thinking in Chinese Film and Theater

Bao Weihong received her Ph.D. from the University of Chicago in 2006. Her teaching and research interests cover late nineteenth century visual and performance culture, Chinese language cinema of all periods and regions, historical screen and exhibition practice as well as transnational genre cinema, comparative media history and theory, and the intersection between film and media. She is the author of Fiery Cinema: The Emergence of an Affective Medium in China, 1915-1945 (University of Minnesota Press, February 2015). Her writings appear in such journals as Camera Obscura, New German Critique, Nineteenth Century Theater and Film, Opera Quarterly, The Journal of Chinese Cinemas, The Journal of Modern Chinese Literature, American Anthropologist, and Yingshi wenhua as well as The Blackwell Companion to Chinese Cinema. She serves on the editorial board for Feminist Media History and is co-editor for the “film theory in media history” book series published by Amsterdam University Press. She is currently working on a few research projects, including the geopolitics of film theory, the historical interaction between film and theater, and cultural constructions of secrecy. She taught at Ohio State University and Columbia University before joining UC Berkeley.

Heejin Lee, UCLA
Cosmopolitan or Vernacular? Sinsosŏl and the Korean Language at the Turn of the Twentieth Century

Ashley Webber, University of Colorado at Boulder
The Difference a Dialect Makes: The Inclusion of Dialect in Mizuki Shigeru’s Kappa no Sanpei

Eunseon Kim, University of British Columbia
The Metapragmatic Practice of Linguistic Politeness: Premodern Korea on the Periphery of the Sinographic Cosmopolis (漢字文化圈)

Harlan Chambers, Columbia University
Portrait of an Anarchist: The Assassin as Medium in Late Qing Discourse

Jiangtao (Harry) Gu, University of Rochester
35 Millimeters of Memory: On the Standard of the Vernacular

Zhang Han, University of Chicago
Philological Jiangnan: The Practice of Wu Dialect in Kunqu Operatic Texts and Performance from the Seventeenth to Nineteenth Century

The Vernacular in Modernity

Wakako Suzuki, UCLA
Saitō Ryokuu’s Method of Parody in Shōsetsu Hasshū (The Eight Sects of Literature): the Critique of Vernacular Discourse in the Age of a Growing Print Industry

Lani Alden, University of Colorado at Boulder
Politics and the Poetic - Representation of the Ainu in Pre-Modern and Early Modern Japanese Poetry 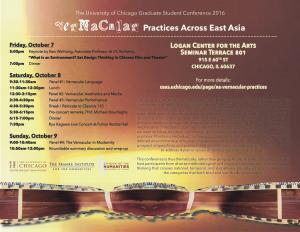