The Committee on Japanese Studies at the Center for East Asian Studies at the University of Chicago is proud to announce the 2017-18 William F. Sibley Memorial Subvention Award for Japanese Translation to Stone Bridge Press for A Shameful Life (Ningen Shikkaku) by Osamu Dazai, translated by Mark Gibeau (Australian National University College of Asia and the Pacific).

This new translation of Dazai's last published - and most enduring - work offers a revelatory portrait of a young man's struggle to survive in a world he cannot comprehend.  His doomed love affairs and constant fear of exposing his true self haunt the pages of his "journal" and portray a slow descent into madness - approximating the life of the author himself.  Osamu Dazai, born 1909, retains an enormous following in Japan today and is as famous for his darkly introspective novels as for his lighthearted children's stories.  Mark Gibeau is Senior Lecturer in the School of Culture, History and Languages at Australian National University College of Asia and the Pacific.

Inaugurated during the 2016-17 academic year, the William F. Sibley Memorial Subvention Award for Japanese Translation is an annual competition coordinated by the Committee on Japanese Studies at the Center for East Asian Studies at the University of Chicago.  Sibley was Associate Professor Emeritus in East Asian Languages & Civilizations and a renown scholar and translator of Japanese literature.  He is best known for his work, The Shiga Hero, first published in 1979 by the University of Chicago Press, which introduced Western readers to the fiction of Shiga Naoya, one of Japan's foremost modern writer.  In keeping with Sibley's lifelong devotion to translation and to the place of literature in the classroom, up to $3,000 is awarded each year as a publishing subvention for translations of Japanese literature into English.

For more information regarding this forthcoming publication, please click here. 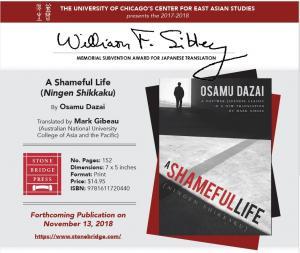