CEAS Associate Member Kevin Ostoyich Pens, "The Unbroken Past: From Germany to Shanghai to San Francisco"

"Kurt and Jeannette Nothenberg lived comfortably in the middle class in Germany raising their only child, Rudy.  Following Kristallnacht, Kurt was arrested and sent to Buchenwald, but was later released on the condition that he leave the country immediately.  The family left by train to Genoa, where they embarked on a journey by sea to Shanghai.  Given that refugees did not need to have a visa to enter Shanghai, the city became an unlikely haven as the countries of the world put up paper walls to keep out the Jewish refugees.  Approximately 16,000 to 18,000 refugees escaped the Holocaust in Shanghai.  Based on interviews with Rudy Nothenberg, in conjunction with his unpublished memoir, documents from the Bremen State Archives, and the United States Holocaust Memorial Museum, “The Unbroken Past” chronicles the Nothenberg family’s time in Shanghai, as well as the complex story of how Rudy, Jeannette, and Kurt each made it to the United States in succession. The Nothenberg family’s refugee history is a timely one, given the present rise in xenophobia and anti-Semitism in the United States."

Read more of this article by Valparaiso University's Kevin Ostoyich, published by the American Institute for Contemporary German Studies, by clicking here.  Co-sponsored with the Joyce Z. and Jacob Greenberg Center for Jewish Studies, Professor Ostoyich delivered a lecture on October 7, 2019 entitled, "There by the Grace of God Did They Go: The Kisch Family Experience in Shanghai and Beyond," where he chronicled the experiences of the married couple, Walter Kisch and Grete Prosnitz, and their song, Eric in Germany, Shanghai, and Austrlia during the 1930s and 1940s. 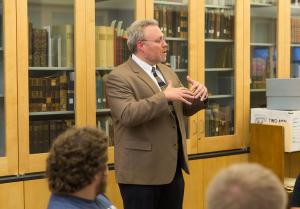 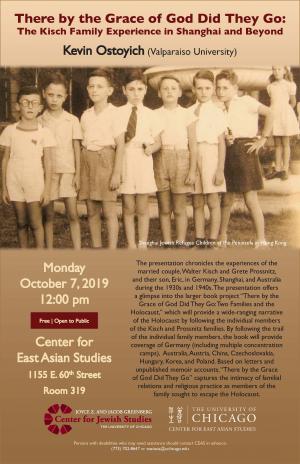