Reached in his coronavirus hideout, Professor Saussy confided in us: “I came into sinology through the side door. Poetry is my consuming passion: languages, including Chinese, are how I get to the poetry.” Why bother learning Chinese, then? Why not French, say? “I studied French: it was my first opening onto a wider world. And I came to France when structuralism was still a thing. I always admired linguistics for the elegance of its demonstrations, its ability to create strong hypotheses from a small set of givens, and anthropology for its pursuit of human diversity. I might have gone into either of those fields (and I continue to read in them) but when I graduated with a degree in Greek, the logical next thing to do was to learn Sanskrit. I failed to find a friendly Sanskritist, so I signed up for first-year Chinese, and then the bug bit. I had a string of inspiring teachers: the popular drama expert Jacques Pimpaneau, the poetry scholar Kang-i Sun Chang, and the intellectual historian Yu Ying-shih, along with a host of other influences from books, occasional contacts, and friendships. I had the chance to listen to Jacques Derrida, Paul de Man, and other people who exacerbated my sensitivity to the rhetorical dimensions of language. All these things come into play when I open a book, and I can’t help wanting to show other people what I find there.”

Professor Saussy writes about literary texts from China, Greece, France, Germany, Italy, the English-speaking world, and elsewhere. “I work a good bit on translation (both as something I do and something I try to have theories about.) Much of what I read comes from several centuries ago, because doing so helps me avoid tunnel vision. I suppose it comes down to a combination of curiosity and fear of being provincial (a reasonable fear, when you come from the shaded lawns of Belle Meade, Tennessee).” His current project is a multi-volume edited work called “A Comparative History of Literature in East Asia.” This will be a long-term, multilingual, multi-script, multi-genre history of the cross-border traffic in literary forms and content from the era of the earliest Chinese writing to the Opium Wars. (Changes in the political and cultural systems of East Asia after 1840 require a separate project.) It will involve an international crew of specialists and considerable editorial work to bridge and synchronize the individual contributions. A draft of the introduction is now being considered for publication as a separate book entitled The Nine Relays: China in Multilingual Asia. The “Comparative History,” when finished, should enable readers to have a better understanding of the cultural achievements of a big part of the world, seen outside the nationalist and sectarian limits usually attached to the concept of “world literature.”

Haun Saussy is University Professor with appointments in Comparative Literature, East Asian Languages & Civilizations, and Committee on Social Thought; Core Faculty, Stevanovich Institute on the Formation of Knowledge at the University of Chicago. 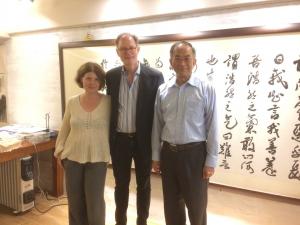 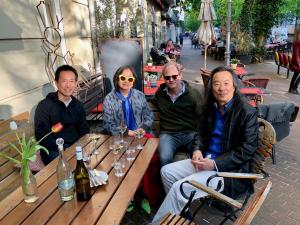 Haun Saussy with Hasegawa Masato, Yo Yo, and Yang Lian in Berlin (2019) 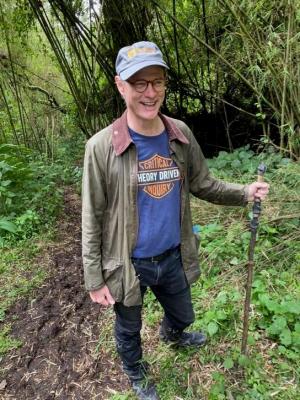