Professor Long has long been fascinated with the place where literature and history bump into one another. That is, where concepts and ideas intersect with the concrete particulars of time and space. Originally trained in the study of modern Japanese literature, his early research focused on ideas of place and region in early-twentieth-century fiction, paying specific attention to how the uneven geography of literary production impacted their presentation and circulation. He subsequently became interested in histories of media and technology as they were written into stories about social connection and communication in the late-Meiji and Taishō periods (1880-1926). He was particularly concerned with how new technologies of rapid communication, such as the post office, put pressure on older ideas about letter writing and its material practice. In all of these projects, Professor Long has tried to find ways to think productively across the particularities of creative acts and the broader social and material realities underlying them.

This impulse has most recently culminated in research and teaching efforts that grapple with the promises and problems of computational methods applied to the study of literature and culture. Upon arriving in Chicago in 2011, Professor Long began exploring the use of quantitative methods to understand the structures and dynamics of literary communities in Japan and elsewhere. He first experimented with social network analysis as a way to investigate patterns of social affiliation and foreign influence in the little magazines and coterie journals that sprouted up around the world in the age of literary modernism. This work eventually culminated in the Global Literary Networks project, a collaborative effort to map the flow of modernist publications between Japan, China, the United States, and Latin America.

From here his interests turned to text mining, which employs methods from computer science and linguistics to extract grammatical and semantic patterns in large corpora. Professor Long became interested in these methods as a way of tracing the diffusion of genres, styles, and themes within and across literary traditions. Working with collaborators at Chicago and beyond, he explored how machine learning and other techniques can enrich histories of the English-language haiku, the transnational circulation of stream-of-consciousness narrative, and the genre of self-writing in Japan and China. He has recently revised these and other case studies for a forthcoming monograph, The Values in Numbers: Reading Japanese Literature in a Global Information Age. The book is an attempt to reframe the study of modern Japanese literature through the lens of computation and digital archives. It demonstrates how knowledge obtained through digital means can both subvert and supplement knowledge obtained otherwise, but also sets our current moment in the context of previous times when new information technologies have challenged received ideas about how and why we read literature. There is much to be skeptical of in the use of numbers to study literature, the book argues, but also much to be gained from building a critical literacy of the algorithms that are reshaping the knowledge infrastructures of today.

One of the unexpected outcomes and joys of Professor Long’s current research interests are the many new friends and colleagues he has met along the way. The interdisciplinary nature of this work has brought him into contact with scholars in fields that are far removed from his own area of expertise, including sociology, linguistics, and statistics. Over the last several years he has been heavily involved with new research initiatives that explore the impact of digital methods on Japan Studies; the use of text mining to study the world history of the novel; the development of tools for enhancing exploration of large-scale, multi-lingual text collections; ways to increase access to digital collections of black-authored texts; and data-driven studies of scientific knowledge. Each of these initiatives has taken him out of his intellectual element in ways both challenging and rewarding. And in each case, he feels that he has become better able to communicate the value of his own disciplinary expertise in relation to the many kinds of knowledge produced in the modern research university. As this production becomes increasingly mediated by digital archives and tools in both humanistic and scientific fields, he hopes his research will have a part in ensuring that the study of foreign literatures and cultures can creatively and critically respond to the future shape of knowledge in the academy.

Hoyt Long is Associate Professor of Japanese Literature, in East Asian Languages and Civilizations and the College at the University of Chicago. 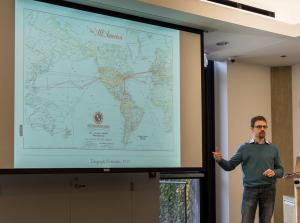 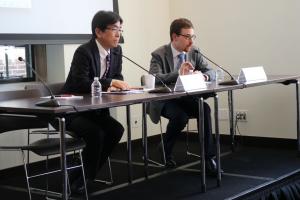