Miki Dezaki, a Youtuber who was threatened and harassed by Japan`s notorious netouyo (cyber neo-nationalists) for his video on racism in Japan, is not shying away from controversial topics with his debut feature length documentary on the comfort women issue. The film, titled Shusenjo: The Main Battleground of the Comfort Women Issue, dives deep into the most contentious dispute between Japan and Korea, and finds answers to hotly debated questions, such as: Were the comfort women “sexual slaves” or prostitutes? Were they coercively recruited? Were there really 200,000 comfort women? And, does Japan have a legal responsibility to apologize? Dezaki interweaves footage from demonstrations, man-on-the-street interviews, news and archival clips with in-depth interviews with prominent scholars and influencers from both sides of the debate. Shusenjo reveals surprising confessions and revelations that uncover hidden intentions of both supporters and detractors while deconstructing dominant narratives.

After the conclusion of the film, there will be a Q&A session with Director Miki Dezaki. 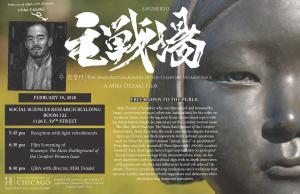