Japanese Magic Lantern: The Minwa-za Company of Tokyo and the Art of Utsushi-e

In April 2011, the University of Chicago community welcomes the Minwa-za Company of Tokyo for a series of events celebrating the uniquely Japanese magic lantern tradition of utsushi-e. This week will feature free workshops, lecture-demonstrations, and performances that will recreate utsushi-e in the original theatrical manner, using reproductions of lanterns and slides of the Edo era.

During Minwa-za's visit to the University of Chicago, the company will present their 200-year-old Japanese Magic Lantern performance, utsushi-e, in a series of events from April 19-23 at the Japan Information Center, International House, the Film Studies Center and Rockefeller Memorial Chapel. All events are free and open to the public.

View a slide show of the performance from backstage.

Magic Lantern: The Origins of the Moving Image

The magic lantern was introduced to Japan in the 18th century by the Dutch, and it remained the dominant form of projecting still and moving images until the beginning of the 20th century. Utsushi-e began ca. 1800 as a traditional Japanese magic lantern show based on back-projection. Directly influenced by Asian shadow and puppet theater, an utsushi-e show is a group performance, founded on interpreting well-known popular stories, tales, and comic episodes from Edo-era entertainments, such as Kabuki, Bunraku, and Rakugo, in a multi-media combination of images, narration and music.

Minwa-za is a Tokyo-based Japanese performance troupe specializing in utsushi-e. Founded in 1968, the company began by staging shadow-puppet shows. In the late 1970s they discovered the lost art of utsushi-e and devoted the next 15 years restoring slides, researching performance techniques, and producing new material. As a result of the acclaim generated by their first public performance in 1993, Minwa-za’s director, Fumio Yamagata, was granted the prestigious title of 'Tamagawa, Bunraku.' In 2008, Minwa-za visited the United States, debuting their revived utsushi-e performances at the Academy of Motion Picture Arts and Sciences, the Smithsonian’s Freer and Sackler Galleries, Lincoln Center’s Walter Reade Theater, and the Museum of Fine Arts, Boston, and in 2010 they were featured in the internationally broadcast NHK series, Last Artisans.

Organized by Artemis Willis, Ph.D candidate, Department of Cinema and Media Studies, in conjunction with Professor Tom Gunning’s Seminar on the Moving and Projected Image. 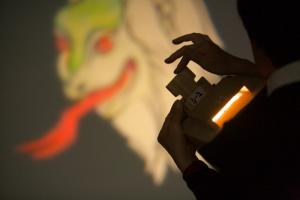 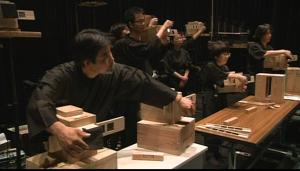