The Center for East Asian Studies recently held Part IV of its Media and East Asia Project entitled “Still Motion: Truth, Memory, and Image in East Asia” which took place at the University of Chicago from April 5 to 7, 2018.

Kicking off the three-day event was a photo exhibition displayed at The Joseph Regenstein Library featuring the works of Japanese photographer, Akito Tsuda, in “Pilsen Days” and “You in Me,” followed by a live performance by Clinard Dance – a contemporary dance company rooted in flamenco.  A collaboration with Cultura in Pilsen, the program integrated Tsuda’s work with the performance by Clinard Dance and generated an interdisciplinary work based on his photos of Chicago’s Pilsen neighborhood in the early 1990s and the static discipline of photography and moving nature of Flamenco dance and music.  Tsuda’s photos of the tailor shop, the shoemaker, and the smiling lady at the laundry tugged at the heart and inspired the percussive footwork of flamenco to join with the rhythms of the sewing machine. Tsuda’s more recent exhibition of “You in Me,” featured photography from the streets of Japan.

Examining the concept of “image” in East Asia across a diverse array of media and historical contexts, the workshop component on day two brought together a group of international scholars for a series of presentations focused on China, Japan and Korea.  Presenters explored the image in its still and moving formats; as it related to notions of iconicity, memory, and recorded traces; and through embodied practices of reading and interpreting.  The Keynote, delivered by Vice Dean of Faculty in the School of Cinematic Arts, and Professor in The Bryan Singer Division of Cinema and Media Studies at the University of Southern California, Akira Mizuta Lippit, examined the intersection of disaster and cinema in the wake of the 2011 tsunami-nuclear crisis in Japan (known as 3.11).  Speakers oriented their papers around a specific image, offered and extended reading of that image as a way of addressing some of the larger themes of the Workshop, as well as broader methodological questions surrounding the study of images.  University of Chicago graduate students served as discussants for the panels. The Workshop engaged with past and current practices of image production through both curated, new media art screenings and art installations in the community.

Day three of the program, held at the Cochrane-Woods Art Center, featured Shanghai-based new media artist, Lu Yang, who showcased a number of her works that tap into visions of death, sexuality (or a-sexuality), mental illness, and neurological constructs of both real lifeforms and deities.  A discussion of her featured works was facilitated by the Department of Art History’s Wu Hung (Harrie A. Vanderstappen Distinguished Service Professor of Art History and East Asian Languages & Civilizations), followed by Q&A with the audience.

The Media and East Asia Project, which began in 2016, consists of a series of workshops that kicked off with a general forum, followed by three workshops that were organized around sound, text, and image.  Through the series of collaborative workshops, this initiative explored the emerging field of East Asian Media Studies with the goal of exploring the interplay of area studies and media studies, and the dynamics of how media presents different histories of cultural production across the region.

This initiative is sponsored by the University of Chicago Center for East Asian Studies with support from a Title VI National Resource Center Grant from the United States Department of Education. 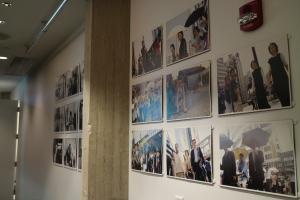 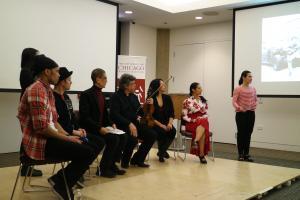 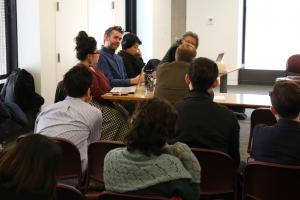 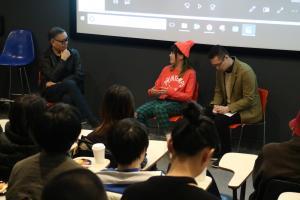 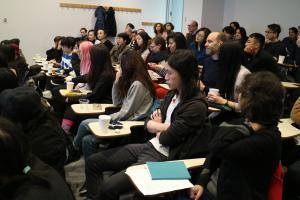